Brett Detar Too Free To Live

The brand new 7" and digital EP from Boston's usLights is officially available for preorder! The limited edition 7" record comes in two color variants that are available to the public that are pressed in 75 copies of each, and the digital version comes with a cover song of Fleetwood Mac's Dreams as a bonus. The vinyl and digital will be available everywhere on October 9th, 2020!

After a couple of hiccups earlier in the year, we are proud to be finally unveiling the newest single from usLights! Titled Exit Scam, this new track embodies the dull ache that comes with the repitition of our daily grind. Wake up, work, eat, repeat.

The Exit Scam EP will be out on digital/7" later this fall! We've got some really gorgeous limited edition vinyl planned and the digital version will include a cover song of Fleetwood Mac's Dreams!

Check out the new music video below:

It's time to formally welcome Serpent Servant Slave to the MOMR family!

Serpent Servant Slave is the newest musical outfit from Jesse Smith (Zao, Gods, Jesse Smith & The Holy Ghost) alongside his longtime collaborator Breyer White. Today, we are excited to premiere the official music video for their debut single, Whatchu' Doin' Wanting More? which is currently available via all digital streaming sites. We also have the debut LP (titled Headless) available for preorder now. The full album will be available everywhere on 7/31/20!

Pre-order the limited edition vinyl and check out the offical music video for Whatchu Doin' Wanting More? below:

The year was 2015 and The Skulx emerged as the rock outfit that we didn't know we were missing. Their eponymous debut LP had our hips swinging and our throats sore from singing along and we've been thirsty for more of their unique stylings ever since.

Thankfully, the wait is over and our boys are back with two brand new songs on a limited edition 7" vinyl! Complete with that signature trumpet-laden back beat swing that we've come to know, these two new songs are still dripping with sex and melody...you're certainly going to have these tunes stuck in your head for days!

Listen to their new single "Danger" and order up a 7"

Not Waving But Drowning | New 7"

In late 2017 and early 2018, legendary metalcore masters Not Waving But Drowning resurrected their social media and started posting some amazing throwback show posters ahead of a handful of reunion shows. They also put out a new song in 2018 that was a part of a crazy 7" compilation, and we asked them if they wanted to be a part of our 7" series...boy were we excited when they said YES!

They carved out two brand new songs for all of us, and they pick up right where the band left off previously: they're heavy, they're riffy, they're melodious, and there's just enough in these two tunes to get you pumped up but also leaves you wanting more. Hopefully this is just the beginning for what we can expect from the NWBD dudes in the future!

Listen to their new single "Bright Eyed And Bushy Tailed" and order up a 7".

A few months back, we were lucky enough to have Alternative Press share the song "I'm On Fire" from PACK, and now we are very excited to share that the 7" single that bears the same name is now available for purchase!

For the uninitiated, PACK is the new alt-rock supergroup formed from current members of Zao, The Juliana Theory, and Punchline. Together, they create some incredibly slick guitar riffs matched up with infectious vocal hooks...definitely not the sound you might first expect given their collective musical pasts, but it's incredibly refreshing nonetheless.

Check it out for yourself and order the limited edition 7".

We are beyond pumped to be bringing you some new music from Sunndrug! It's been nearly two years since we released Exit Wounds, but these guys spent their time wisely, honing their craft and continuing to dial in their unique blend of alt rock and electronica. Check out the Bleed Your High music video below and pre-order their new 7" now!

The time has come. We've had the new single from Holy+Gold out into the wild for a couple of weeks and it is time to submit for your preorder the vinyl version of Everything Needs Something...I Need Your Light! You can preorder the vinyl here and you can find Poisoned Wombs at Spotify or you can watch the lyric video below.

The Damien Done LPs are finally wrapping up at the plant and will be shipping to us early next week! Once they arrive, your copies will begin shipping right away

Mike Adams At His Honest Weight

We have a brand new 7" EP from Mike Adams At His Honest Weight that is available in the store right now! These are also done at the plant and will be shipping right around the release date of 4/21. Check out the live version of "Turn Our Love Around" - the A Side from the EP - right below, and click here to snag a copy of the 7" as well.

The time has come! We've got a third single from Charm Offensive, the debut full-length from Damien Done. The vinyl and digital will be availble worldwide on 3/2! Check out "Who's Gonna Believe You?"

End Of The Year Announcements

It just wouldn't be right if we didn't squeeze in just ooooone more great announcement here at the tail end of the year. Okay...maybe it's actually two announcements. Oops!

We announced on social media last week that the Boston indie-rock group 27 has officially joined the MOMR roster! Today, we are pleased to make available their new 7" single, Innocent Lovers. You can find that right here!

Seven Inch Of The Month Club

The aforementioned 7" release from 27 also kick starts our first ever Seven Inch Of The Month Club for 2018. It's pretty much what it sounds like: we have a 7" single slated for each month of the entire year, starting in January! Of course, there is a bit more to it than that (including some insane bands that are taking place), so you should read all about that right here!

Stay safe with all of your holiday activities and thanks for all of your support here in 2017. Here's to 2018! 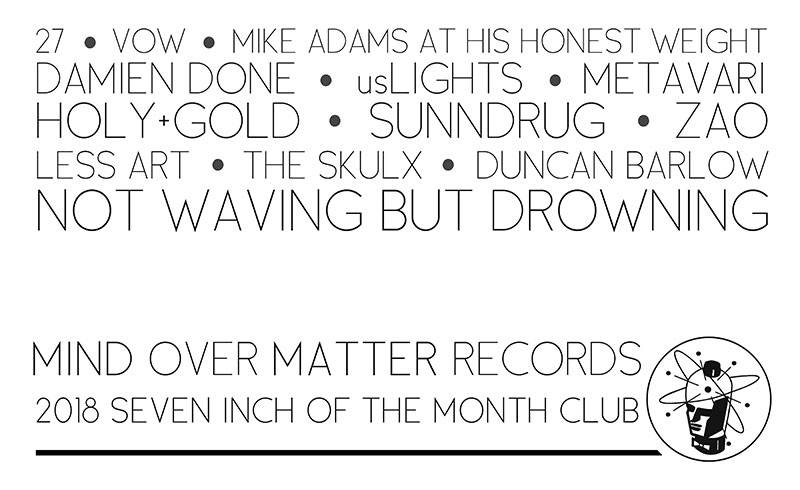 We were fortunate enough to grab a few import copies of Damien Done's Stay Black EP as well as the 7" that was released alongside it featuring 2 brand new songs (3 if you're counting the bonus download-only track) and we've got copies in the store. We also put together a little bundle with the Curious Thing EP if you want to snag all three!

There were a few leftover pieces from Sunndrug's recent tour, and we've just put them up in our webstore! There was a tour edition of Exit Wounds that was limited to only 25 copies and we've got 4 of them up for grabs along with a new shirt style. Quantities are limited for both!

Well, we've done a bad job at keeping this page updated, but we've got a brand new music video for Damien Done, but you passed that on the way in, didn't you? We've also got the preorders for the "Curious Thing b/w Primitive" 7" EP up for grabs. The B-Side is a cover of Killing Joke's "Primitive" and is exclusive to this 7" release.

This EP will be available digitally on 9/8 and we expect the records to ship on or around that date as well!

If you've ordered a copy of the Bad Rabbits "American Nightmare" 2xLP, they are shipping currently so expect updates to your tracking info!

If you've followed any of our social media accounts, you know that we are FULLY stoked to be working with Virginia Beach's Sunndrug - this new outfit is comprised of ex-members from Spitfire and Norma Jean, just to name a few.

We've got the new single streaming on the front page (surely you saw it on the way in?), and if you haven't heard the first tune from their debut LP Exit Wounds, it's called "Denial" and here is the official video for it.

The front page pretty much says it all! It's been in the works for what feels like an eternity, but the Deluxe Vinyl Reissue of The Juliana Theory's Deadbeat Sweetheartbeat is finally going to see the light of day! Preorders begin on Saturday 7/16, and mailing list members will get first grabs. Expect that email to go out on Thursday night! Thanks for the love.

DIY 'Till We Die

From Michigan to Los Angeles to Chicago, we've created a coast-to-coast legacy of creating unmistakably cool physical media. With a focus on vinyl, our releases are all touched by hand. Punk rock ethos blended with ground-breaking artists.